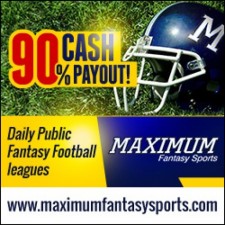 Maximum Fantasy Sports has opened mid-season fantasy football leagues for players wanting a fresh start for the second half of the NFL season.

Chicago, IL, November 1, 2016 (Newswire.com) - As the NFL season enters week 9 of the 2016 football season, we find ourselves midway through the standard fantasy football season and many teams are buried too far in the standings to have playoff aspirations. Maximum Fantasy Sports (“MFS”) (www.maximumfantasysports.com) is offering Mid-season Fantasy Football Leagues alongside their Daily, Weekly and Monthly Fantasy Football Leagues to give those players a chance at competing in a new fantasy football season.

Full descriptions of these leagues can be found on their website’s Public League ruleset. It is common for fantasy football websites to allow players to start Survivor Pools midway through the season after most, or all, of the teams have lost, but it is rare that a website offers a chance at a new fantasy football season while the NFL season is underway.

“Fantasy sports participants are a mixed bag. Some players will only play in Daily Fantasy Football Leagues, some players refuse to play DFS and will only play in season-long leagues or at least multiple-week leagues and some simply love the game and will play in all league types. We provide gaming options for all of those players,” said Bill Parsons, President of Maximum Fantasy Sports.

In-season leagues do not easily lend themselves to a head-to-head schedule and playoffs, so the format used is to rank the teams in standings using the total points accumulated by the starting lineups. These leagues are built using a Live Online Draft and not a salary cap. In addition to these Public fantasy football leagues, MFS has also partnered with The Wagner Wire (“TWW”) and is sponsoring a DFS Free Roll contest whereby players pit their teams against the best team put together by TWW’s Adam Wagner for prizes. These leagues are found on the company’s Open Leagues page.